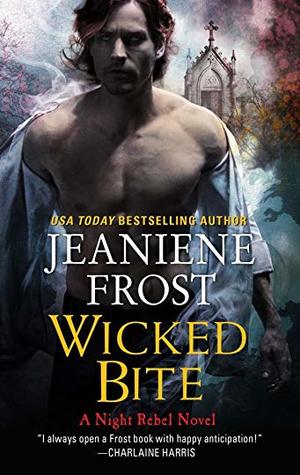 Some promises are meant to be broken…

Veritas spent most of her life as a vampire Law Guardian. Now, she’s about to break every rule by secretly hunting down the dark souls that were freed in order to save Ian. But the risks are high. For if she gets caught, she could lose her job. And catching the sinister creatures might cost Veritas her own life.

Some vows are forever…

Ian’s memories might be fragmented, but this master vampire isn’t about to be left behind by the woman who entranced him, bound herself to him, and then disappeared. So what if demons, other Law Guardians, and dangerous, otherworldly forces stand against them? Come hell or high water, Ian intends to remind Veritas of the burning passion between them, because she is the only person seared on his mind–and his soul…

This was a great continuation to the Night Rebel series. While I didn’t love it as much as the first book, this was an action-packed and entertaining book.

This book picks up right where book 1 ends. Ian and Veritas are separated, with Ian barely remembering the past few months. I was prepared for Ian and Veritas to be separated for most of the book, but I should have had more faith in Miss Frost. She did not leave us suffering for too long.

“No wonder I married you.”

I adore both these characters. They can both be frustrating and aggravating, but they are some of my favorite characters ever. Ian rises to any and all challenges, he’s not afraid of anything. He’s also such a charmer. Veritas can be just as stubborn, and throughout the book she struggles with two sides of her personality. But I love her, flaws and all.

Of course, we see a lot of characters from previous books here. Seeing Cat and Bones and the rest of the gang is always a good time. I never want to leave this world. These characters have been in my life for so long, I can’t even imagine not being able to read about them every once in a while.

“All I felt was how tightly he held me, how his power sparked against my skin, and how he kissed me with delicate savageness, as if he sensed my turmoil and sought to turn it into raw need instead.”

This books is filled with humor and sexiness. There were a lot of surprises thrown in throughout the story. It does end in a bit of a cliffhanger, but at least book 3 comes out later this year. I think…

Book One Review -> Shades of Wicked