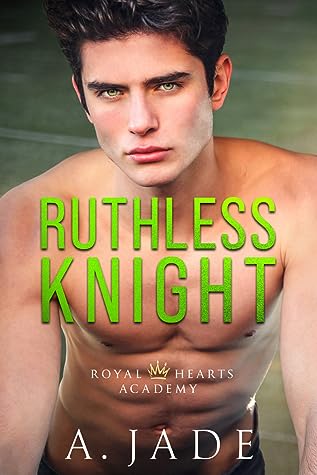 Welcome to their kingdom…

Cole Covington is the most popular heartbreaker at school.

Every guy wants to be him and every girl wants to screw him.

His devastatingly good looks, golden arm, and flirty smiles don’t do it for me anymore…because I know what’s lurking underneath the star quarterback’s gorgeous armor.

At least I thought I did.

Sometimes the most beautiful people…hide the ugliest truths.

And sometimes the only way to save someone… is to walk beside them through hell.

Sawyer Church is the bible-thumping nerd of Royal Hearts Academy.

Girls pick on her and guys don’t notice her.

No matter how much I try.

Everyone at school has her pegged as the chubby, Jesus loving geek, but unlike them—Sawyer’s real and never pretends to be someone she’s not.

Until I ask her to be my fake girlfriend.

Sometimes the most beautiful souls… hide the greatest pain.

And sometimes the only way to save someone… is to fight for them.

I’m so torn. Giving this book three stars feels like a crime, but rating it four stars means it’s on the same level as book one. And I’m not sure it is… So tentatively I’m giving this four stars, but I didn’t like it quite as much as book 1.

Cole is focused on one thing: playing football. It’s his love and soul, and what he’s been focusing on his whole life. Sawyer is kind, religious, and a total sweet heart. She tries to keep her head up, but being constantly belittled and bullied is getting to her.

These characters were amazing. They are both so full of pain and a little bit broken. But the author made sure to build them back up and make them even stronger. Cole had been through a lot  in his eighteen years. He’s lost so much of his family, and he was filled with such anger and bitterness. Sawyer was too nice for her own good, way too forgiving, and with such a big heart.

They shouldn’t make sense together, but somehow they do.

The romance was *chef’s kiss* The banter. The sexual chemistry. Ooof.

It was all here.

What I’m torn on? How Sawyer’s issues with her weight were dealt with.

I understand what it’s like to want to be skinnier. Telling yourself that you love yourself as you are, and as long as you’re happy with yourself, fuck everyone else. But also secretly wishing you looked more like your friends, even though you know you shouldn’t.

I understand the pressure to want to look like everyone else and it can be suffocating. Especially when you’re surrounded by people who make you feel inferior.

However everyone using fat like it’s a dirty word grated on me. It’s an adjective, just like so many others. So while I understood the journey Sawyer went through, I wasn’t thrilled at how it ended.

That being said, I do wish that authors would write books where they’re fat characters don’t hate themselves. And while Sawyer does eventually get there, she does spend most of the book doing just that.