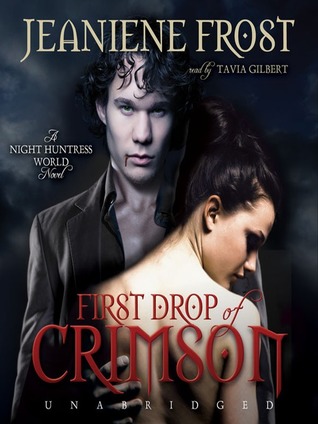 The night is not safe for mortals.

Denise MacGregor knows all too well what lurks in the shadows – her best friend is half-vampire Cat Crawfield – and she has already lost more than the average human could bear. But her family’s dark past is wrapped in secrets and shrouded in darkness – and a demon shapeshifter has marked Denise as prey. Now her survival depends on an immortal who craves a taste of her.

He is Spade, a powerful, mysterious vampire who has walked the earth for centuries and is now duty-bound to protect this endangered, alluring human – even if it means destroying his own kind. Denise may arouse his deepest hungers, but Spade knows he must fight his urge to have her as they face the demon nightmare together…

Because once the first drop of crimson falls, they will both be lost.

I love this world that Frost has created. Cat and Bones’ series is one of my favorite paranormal series ever. For the longest time I said I was going to read Spade’s and Mencheres book, but I never got around to it. After I read Ian’s book I completely fell in love all over again with these characters. When I saw Frost had to push back Ian’s second book, I figured it was the perfect time to read Shade and Mencheres while I waited.

While I think it’s best to read all of Frosts book in the order of publication, at the end of the day you won’t be missing too much if you decide to just read this one. Spade is first introduced in Cat and Bones first book, while we meet Denise in the second book.

After the death of her husband, Denise finds herself isolated from her best friend Cat and trying to forget the fact that vampire exist. When her aunt and two cousins are murdered by a demon, she finds herself right back in the middle of the paranormal world, and needs Spade’s help in defeating the demon.

Frost has a real talent of crafting these amazing characters. Both Denise and Spade are very likable, they’re both funny and loyal. Spade is patient and caring, Denise has felt such terrible loss, but she keeps her head held high through it all. The banter between the two of them is A+ and the romantic tension leaps off the pages.

This was a fun and sexy romance. It also has so many paranormal elements, and the plot will keep you on your toes. But these characters are just so witty, there are a lot of laugh out loud moments here. Overall, this was a great addition to the world Frost has created.