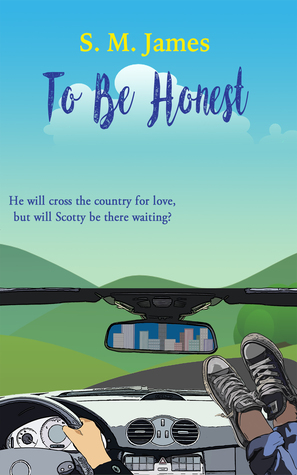 Angus Reid is pretty sure he’s being catfished.

After spending the last half of junior year talking online to the guy of his dreams, Angus wants to meet. In person. So when Scotty brushes it off with excuses of not being ready, red flags go up.

Determined to either catch Scotty out, or take a shot at real love, Angus embarks on a summer road trip with his adorkable roommate, Tyler. But as summer stretches on, and mixed messages fly between them, Angus finds his heart torn.

Or his straight best friend?

And while their road trip takes them across the country, Angus is headed for one destination.

Either a happily ever after … or a broken heart.

To Be Honest… I’m not sure how I feel about this. Every time you read a YA book, you have to make sure you remember that the characters are teens. Teenagers can be immature, selfish, very flawed. Teenagers are evolving and learning every day, but sometimes they make mistakes. Big mistakes.

Angus Reid is an Indian-American high school senior, he is also openly gay. A few months earlier his roommate, Tyler, suggests a website where Angus can be completely anonymous and maybe make a friend. There he meets a Scott, a kind of closeted guy who lives in San Francisco. They quickly start up a friendship which leads to Angus catching feelings.

Angus really wants to meet Scotty. So much he decides to go on a road trip to San Francisco on the off chance he can convince Scotty to see him. So with his best friend, her boyfriend, and his roommate, Angus finds himself traveling through the U.S.

My main issue with the story was the big reveal toward the end of the book. I won’t say what it is because of spoilers, but I wasn’t a big fan of it. I felt a very big breach of trust and respect when it came to that plot point. All of the characters were entertaining and interesting though. They were all complex and flawed kids, it was a realistic portrayal of how high schoolers act around each other.

All and all this was a pretty good book. I definitely am here for more YA contemporary LGBTQ+ books, especially with characters of colors!

One thought on “ARC Review: To Be Honest”