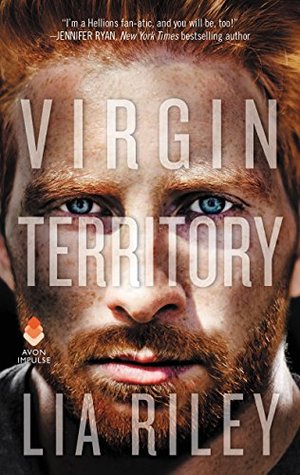 Patrick “Patch” Donnelly has what it takes to be the best goalie in the NHL…if only he could learn to control his temper. When Coach orders him to get his head in the game with private yoga classes, Patch isn’t having it. There’s no way this tough Boston guy would be caught dead downward dog-ing his way to inner peace. But if he refuses, he risks his starting position and the dream he sacrificed everything for, including joining the priesthood.

Yoga instructor Margot Kowalski is over men. After yet another toxic relationship, she’s eager to forget love and focus on growing her business. Doing the Hellions head coach a favor by helping out a troubled player can’t hurt, and it might give her career a high-profile boost. But free-spirited Margot is soon charming the pants off Patch. Literally. Her sassy combination of sweet and sexy proves irresistible to the goalie. Before Patch can give into temptation though, he’ll have to confess his biggest secret:

But Patch is hiding more than sexual inexperience, and his dark past soon threatens to destroy his shot at true love.

Margot stood on tiptoe, both hands clutching the front of his t-shirt, and kissed him full on the mouth. Their ragged breaths mingled a moment. He tasted the brown sugar in her lipgloss before she broke free, pressing a quick second kiss to the tip of his nose.

“Go to bed,” she whispered, clearing her throat and stepping back. “And have a great game tomorrow.”

It took every last shred of Patch’s willpower not to close the space again, to consume her. “There’s something else you should know.”

“I’m not going to get a lick of sleep if you leave.”

“If I stay, you won’t sleep either,” she shot back, shrugging into her jacket.

She shook her head slowly as if with reluctance. “I’ve got to fold. Goodnight.”

He took her hand and held it between his own. Her skin was cooler than his. He didn’t like that. He wanted to tuck her against him, warm her up. “Do me a favor and call when you get home. I want to know you got back safe, especially driving on that spare.”

“It’s been a long time since anyone has cared if I got home,” she said with a smile. “Careful, you might be turning into a gentleman.”

“Don’t get carried away. The things that I want to do to you are far from gentlemanly,” he said in a husky tone.

She rocked her head back and unleashed a frustrated moan. “Quit leading me into temptation. I’m trying to respect your virtue here.”

“My virtue can take a long jump off a short fucking bridge.”

“That might be. But . . .if we end up taking that jump. I want it to be special. That’s important. I want you to feel special.”

Blood rushed to his ears. “Funny, I feel the same way about you.”

“Then we’re in agreement and I’m leaving.” A wicked gleam entered her gaze. “But while you wait for my call, slip into something more comfortable.”

She blew a kiss, pirouetted, and was gone.

After studying at the University of Montana-Missoula, Lia Riley scoured the world armed only with a backpack, overconfidence and a terrible sense of direction. She counts shooting vodka with a Ukranian mechanic in Antarctica, sipping yerba mate with gauchos in Chile and swilling fourex with stationhands in Outback Australia among her accomplishments.