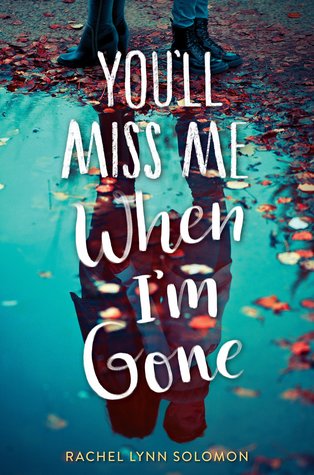 Eighteen-year-old twins Adina and Tovah have little in common besides their ambitious nature. Viola prodigy Adina yearns to become a soloist—and to convince her music teacher he wants her the way she wants him. Overachiever Tovah awaits her acceptance to Johns Hopkins, the first step on her path toward med school and a career as a surgeon.But one thing could wreck their carefully planned futures: a genetic test for Huntington’s, a rare degenerative disease that slowly steals control of the body and mind. It’s turned their Israeli mother into a near stranger and fractured the sisters’ own bond in ways they’ll never admit. While Tovah finds comfort in their Jewish religion, Adina rebels against its rules.

When the results come in, one twin tests negative for Huntington’s. The other tests positive.

These opposite outcomes push them farther apart as they wrestle with guilt, betrayal, and the unexpected thrill of first love. How can they repair their relationship, and is it even worth saving?

This was such a haunting read.

I can’t give this anything less than 5 stars because I devoured it. I read it in one day, and by the end of it I was emotionally drained. This story broke my heart over and over again. I had to take little breaks between chapters to just catch up on my thoughts.

This follows two estranged sisters, who are complete opposites. One artistic and outgoing, and the other academic and an introvert. After their 18th birthday, they are tested for Huntington’s, which runs in the family. One of them tests positive, the other negative. Now one sister must rethink her future plans and factor in Huntington’s, while the other has to wrestle with the guilt of testing negative while her sister tested positive.

There were times that both Adina and Tovah were unlikable, but that just made me like them even more. They were flawed, sometimes selfish, but very complex and real. Their relationship was so far from perfect, with jealousy and guilt between them. And there were times when you were siding with Adina in their arguments, and then the next chapter you were rooting for Tovah. But the end of day, you just couldn’t help but sympathize with both of them. They both made their mistakes, but they both were so well-developed and you just wanted them to reconcile and try to fix their relationship.

Every single relationship in this book was so fragile. Adina and Tovah’s relationship, their relationship with their parents, with their love interests, their friends. I recommend this to anyone who likes reading about complex characters.

This story also has a heavy focus on the sisters’ religions: Judaism. They talk a lot about their faiths, traditions, and practices. One sister is very religious while the other has her doubts.

This book was heartbreaking but also hopeful. It was one of my most anticipated books of 2018 and I’m so glad it didn’t disappoint me.

17 thoughts on “ARC Review: You’ll Miss Me When I’m Gone”