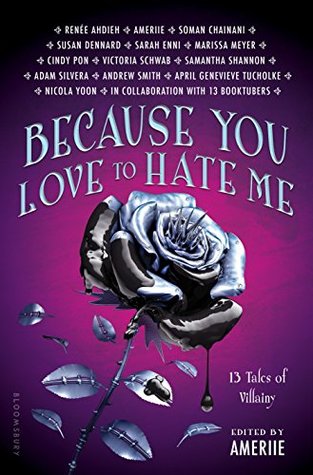 Leave it to the heroes to save the world–villains just want to rule the world.

In this unique YA anthology, thirteen acclaimed, bestselling authors team up with thirteen influential BookTubers to reimagine fairy tales from the oft-misunderstood villains’ points of view.

These fractured, unconventional spins on classics like “Medusa,” Sherlock Holmes, and “Jack and the Beanstalk” provide a behind-the-curtain look at villains’ acts of vengeance, defiance, and rage–and the pain, heartbreak, and sorrow that spurned them on. No fairy tale will ever seem quite the same again!

This anthology got off to a rocky start, but overall it was a good read. I will say I skimmed a lot of the Booktubers essays, there were a few that were interesting, but overall I feel like they didn’t add a lot to the story. Of course, my favorite story was from Victoria Schwab, but there were quite a few that stood out.

1. The Blood of Imuriv by Renee Ahdieh & Christine Riccio
4 stars. What a great start to this anthology, but is anyone surprised? It’s Renee Ahdieh after all. Honestly, this would make an amazing full-length novel.

2. Jack by Ameriie & Tina Burke
2 stars. There was nothing inherently wrong with this, it’s just soooo boring. I don’t know, I’ve never found the Jack and Beanstalk story interesting at all.

3. Gwen and Art and Lance by Soman Chainani & Samantha Lane
2 stars. I didn’t like how this was told though text messages. I think this could have been so much better if it wasn’t. I mean, it takes the King Arthur legend and combines it with the Persephone and Hades myth. This should have been more interesting.

4. Shirley & Jim by Susan Dennard & Sasha Alsberg
2 stars. This one was disappointing because I love Sherlock Holmes. This definitely missed its full potential.

5. The Blessing of Little Wants by Sarah Enni & Sophia Lee
3 stars. This one was really weird, it’s about a sorcerer who’s looking for immortality. I’m positive I still don’t fully understand what happened. But after the last 3 stories this was pretty good.

6. The Sea Witch by Marissa Meyer & Zoe Herdt
4.5 stars. Ayyyyyy! This. Was. So. Good. Finally! This was about Nerit, a mermaid, and she is truly villainous. *evil laughter* This was basically the Sea Witch’s origin story from The Little Mermaid, and it worked perfectly as a short story.

7. Beautiful Venom by Cindy Pon & Benjamin Alderson
4.5 stars. This made me want to read a book by Cindy Pon so bad. This was a retelling about Medusa’s origin story, and it was so good. It discussed beauty standards, rape culture, and this hands down had the best villain.

8. Death Knell by Victoria Schwab & Jesse George
5 stars. *sobs* THIS WAS AMAZING. I’ll be honest, this was the main reason I wanted to read this anthology. I can admit this, I have no shame. And it did not disappoint! This story follows Death and it’s beautiful ok. It was beautiful and filled with Schwab’s lyrical writing. One of my favorites.

9. Marigold by Samantha Shannon & Regan Perusse
4 stars. This was good. It was filled with twists, which was the best part of the story. This is an interesting read, it combines 19th century retelling and female empowerment.

10. You, You, It’s All About You by Adam Silvera & Catriona Feeney
4.5 stars This was so creative and also a little fucked up. This follows a teenage drug lord, and she is twisted. Seriously. Also, she wears a mask made of skin ???/?!? This girl is frightening.

11. Julian Breaks Every Rule by Andrew Smith & Raeleen Lemay
4 stars. This was a pretty funny story. The prompt is “a psychopath in a futuristic setting.” It follows Julian Powell, he has the power to wish anyone to death, well anyone except Steven Kemple, the boy he hates more than anything.

12. Indigo and Shade by April Genevieve Tucholke & Whitney Atkinson
2 stars. This was so… average. I just don’t think I’m a fan of Tucholke’s work. I wasn’t a fan of the narrator he was cocky and annoying, he tried way too hard at being mysterious.

13. Sera by Nicola Yoon & Steph Sinclair and Kat Kennedy
4 stars. I love Yoon’s writing, so it’s not a surprise that I really enjoyed this. The one thing I didn’t like was the amount of time we spent in the flashback instead of the present. Other than that, this was such an interesting read and it had one of the most creative prompts “gender-flipped God of War.”

5 thoughts on “Review: Because You Love to Hate Me”