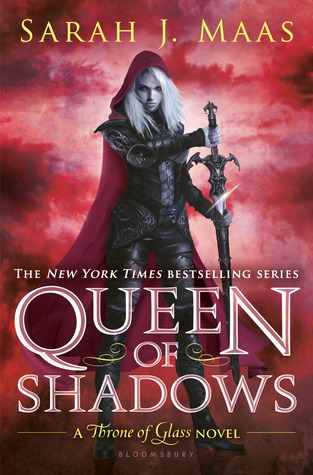 The queen has returned.

Everyone Celaena Sardothien loves has been taken from her. But she’s at last returned to the empire—for vengeance, to rescue her once-glorious kingdom, and to confront the shadows of her past…

She has embraced her identity as Aelin Galathynius, Queen of Terrasen. But before she can reclaim her throne, she must fight.

“With the suit, the boots, and the mask, she knew she was Death incarnate.”

This series started off with Throne of Glass which I really enjoyed, it was a light fantasy, filled with action and mystery. Then there was Crown of Midnight which was ahhmazing. Seriously. Then came Heir of Fire, which was okay, it took me a few weeks to get through it and is definitely the weakest in the series.

Queen of Shadows starts off with Aelin returning to Rifthold to find the third Wyrdkey that was taken from her 10 years ago. Dorian’s possessed by a Valg Prince who is slowly consuming him. Chaol is trying to save Dorian. And Aedion is imprisoned for treason and about to be executed. This is the basic plot and all you should know so the story won’t be spoiled for you.

While this series may have its faults, something it isn’t lacking is girl power. I swear there are so many badass heroines in this book: Aelin, Manon, Kaltain. But by far my favorite character in Queen of Shadows was Lysandra. I have no idea where the hell she came from but her friendship with Aelin and just general characterization and backstory was amazing.

“Lysandra’s smile was a thing of savage, dark beauty.”

Manon was someone I wasn’t a huge fan of in Heir of Fire but her character is so much more fleshed out here, good thing because she is a big part of the story. And it made reading in her POV so much more interesting.

Also, I know the romance was making a lot of readers worried, but chill out, a decision is made here.

It is upsetting that my Chaol ship has sunk. And am I the only one who wanted Aelin and Rowan to stay best (platonic) friends and just kick ass together or..?

[Although it is upsetting that my Chaol ship has sunk. And am I the only one who wanted Aelin and Rowan to stay best (platonic) friends and just kick ass together or..? (hide spoiler)]

The reason I couldn’t rate this any higher, and almost rated it lower, was the length. It was way too long in my opinion, like 100 pages too long. But this book is a lot better than its predecessor. And once you get past a particularly rocky start you will fly through the pages because it is filled with so much action and feels.

One last thing. This book definitely has the “happiest” ending out of all the book. So, no worries about a brutal cliffhanger. (But I think that’s just Maas giving you a bit of happiness before she rips your heart out.)