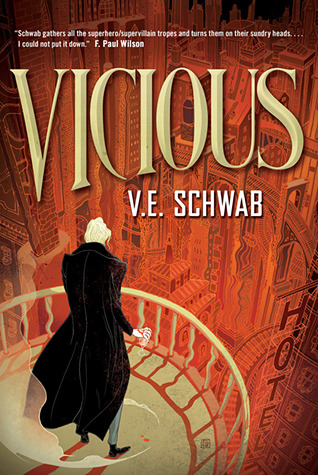 There are no good men in this game.

This book was fucking amazing. It’s been on my radar for months and I’m kicking myself for not reading it earlier.

Vicious follows two college roommates, one of who focuses his senior thesis on ExtraOrdinaries (people who have superpowers.) After experimenting with near death experiences they both develop their own superpowers.

The pacing of this book was actually perfect. The fluidity in which Schwab moves from the past to present, and from POV to POV is exemplary. Her writing style is addictive and makes it impossible for you to put this down.

But the characters are what makes this book so fucking amazing because villains.Villains everywhere. All the time. I seriously love villains, they’re so much more interesting to read about than heroes.

Victor Vale was not a fucking sidekick.

VICTOR FUCKING VALE Do I even need to say more? He’s ambitious, arrogant, and when he breaks out of prison he only has one thought on his mind. Revenge.

Every emotion Victor went through, from his loneliness to jealousy and betrayal was so realistic, I’m kind of worried about how relatable I found him. (Should I be worried??) Anyway, his thirst for vengeance made him so very human and these shreds of humanity made it impossible to hate him.

He was precocious, and frighteningly charming, the kind of guy who got away with everything, thanks to good genes and quick wits.

Eli Ever has a politician’s smile and likes to play the hero. He considers himself a weapon of god and makes it his purpose to rid the world from EOs. His twisted relationship with Victor, which is made up of jealousy, greed and obsession, made him all the more fascinating to me.

The side characters are all cool as fuck too. Serena was scary as hell. Mitch was adorable with his obsession with chocolate milk. Sydney was so tiny and precious. Schwab manages to create realistic characters you can’t help but sympathize with, no matter if they’re good or bad, or people or animals. Dol you adorable mutt.

With no useless characters or throwaway plot, Vicious is completely addicting and a truly unforgettable read. (Where is the sequel???)

P.S. This book would make a really great movie. Right?

P.P.S. Resurrect me when the second book comes out.